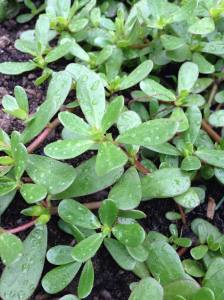 i wanted to like this weed. really, i did. i’d tried it a number of times, over a few years, from our garden. we just never seemed to connect. so i’d rip it out (sometimes) or leave it alone (usually).

this year, i don’t know – maybe because it was growing in a bit shadier conditions? getting a wee bit more water? more nutritious soil? anyway, much more pleased.

fdlreporter.com – Purslane: To Eat or Not To Eat

Gather Victoria has a lovely post today on herbal-infused honeys, my new, favourite way to use herbs for daily health & enjoyment. 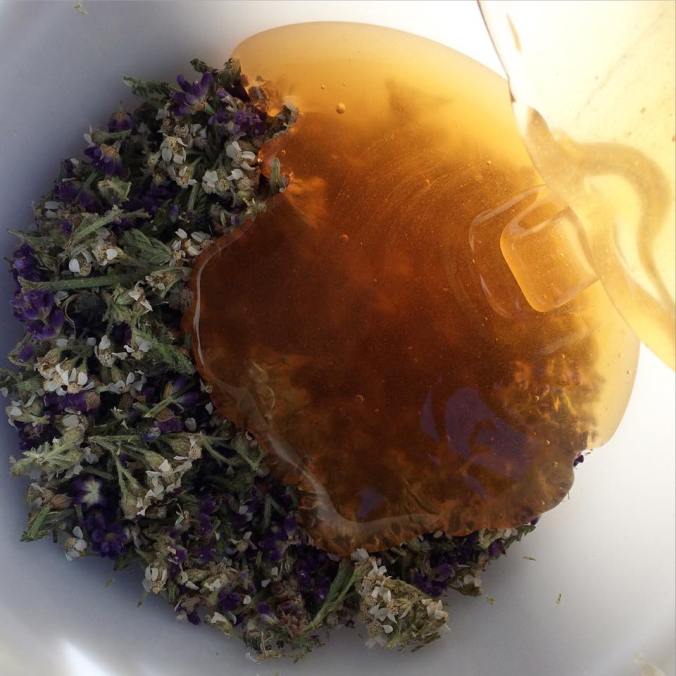 I myself recently made some infused honeys:  wild peppermint, pineapple weed (a local chamomile) and Grindelia from our local beach (my favourite).

I recently purchased Nourishing Days’ Shannon Stronger’s 100% Rye sourdough recipe e-book, and have been super thrilled with the results.  I’m using my wild-wrangled-yeast whole rye sourdough starter for the sourdough called for in the recipes, and it seems to work just fine (it’s roughly a 1:1 by volume ratio of flour:water).  I just made the brownies and they are divine – rich, brownie texture, not too sweet (i.e. it’s not the only flavour), but really great chocolate fix.  Our favourites:

I’ve made the above recipes so many times, I’ve almost got them memorized.  I’ve adjusted the multipurpose dough to a “bucket” dough, and find that leaving it in the refrigerator overnight (at least) really improves the resulting bread.  Using Shannon’s No-Knead Sourdough Loaf recipe (but the bucket-ed sourdough) I add 3 tsp cinnamon, and I use a smidge of olive oil before measuring the molasses (I think it’s 5 tbsp molasses that I add), and 3 tsp sea salt (I’m pulling this from the back of my brain, might not be right! check her original recipe, similar to her boule recipe).

I take out about 3 cups of the “bucket” dough and reserve it to start my next bucket – adding no further starter, just following Shannon’s directions for the rest of the multipurpose dough recipe.  I’ve made three loaves from the leftover “bucket” dough: two regular sourdough loaves, plus a raisin loaf, to which I add raisins and more cinnamon and a bit of raw sugar (maybe 2 tbsp) after I’ve removed enough prepared dough for the two regular loaves first.

Recently, I used my Pullman loaf pan (inherited via my aunt’s family who used to run a deli business and baked their bread in that loaf pan every morning) to make up all of the dough in one big loaf (minus the 3 cups removed for starting the next “bucket”), and it was magnificent.  It took longer to bake, but I let it rise first, and baked it at the same temp as Shannon’s regular loaf recipe calls for.

I believe this has been a very successful $6 (roughly!) spent.